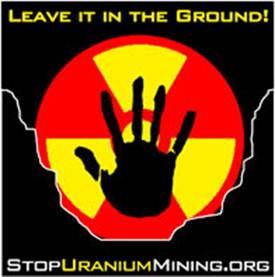 Grand Council of the Crees News

The Canadian Nuclear Waste Management Organization (NWMO) has been in New Brunswick talking about the possibility of establishing an underground nuclear waste site in this province. That’s a waste of time and money.

The Ministry of Mines and Energy’s moratorium on the issuing of uranium exploration licences in Namibia remains in place after a legal challenge to a decision taken in terms of the policy was dismissed in the High Court in Windhoek on Friday (Feb. 11). (Namibian, Feb. 15, 2011)

The Green League’s party council is calling for a ban on uranium mining in Finland. “Bad decisions on nuclear power plants are now getting a follow-up with uranium mines. This madness simple has to be brought to an end,” says Green MP Erkki Pulliainen.Pulliainen added the view that a few years of mining operations are not worth ruining the reputations of Kainuu and Lapland as travel destinations. The Greens intended to oppose uranium mining on both the local and national level.

After some confusion around a Greenland multi-element mine, the Greenland Government confirmed that its “zero tolerance policy” toward uranium mining is still in place.

Delegates to the pre-congress released a joint statement calling for an end to all uranium mining and processing, irresponsible radioactive waste management, nuclear power and nuclear weapons.

A moratorium on exploration and mining of uranium in Nova Scotia will be made law.

The province introduced legislation today, Oct. 14, to entrench a uranium ban that had been in effect since 1981.

In October 2009, Tanzanian NGO’s in cooperation with European NGO’s organized the Tanzania Uranium Awareness Campaign 2009, starting with a conference in Arusha and ending with a 2-day conference in Dar Es Salaam.

During both conferences, participants expressed major concerns about the possible dangers of uranium mining coming to their country, and at the final conference in Dar Es Salaam a statement was issued.

FLAGSTAFF, Ariz. (AP) — The Hualapai Tribe has renewed a ban on uranium mining on its land near the Grand Canyon, joining other American Indian tribes in opposing what they see as a threat to their environment and their culture.

In September 2009, a ‘Workshop of reflection and Training on Uranium Exploitation’ was held in Bakara, just outside N’Djamena, the capital of Chad, in the face of the fact that a variety of uranium mining companies had started to explore for uranium in the sub-Sahara region countries.

After the one-week-workshop, they issued the “Declaration de Bakara”.

The Declaration was made publicly at a media conference in N’Djamena.

The Province will not support the exploration and development of uranium in British Columbia and is establishing a “no registration reserve” under the Mineral Tenure Act for uranium and thorium, Minister of State for Mining Kevin Krueger announced today.

The moratorium, which passed 8-7, goes into effect immediately and will stay in place until March 31, 2011 when it will be revisited, according to a news release.

The ban applies to the working, production, mining and development of uranium in Nunatsiavut, the land settlement area in northern Labrador. However, the Nunatsiavut government said it will still allow uranium exploration, and is willing to work with mining companies while the ban is in place.

Uranium Mining Ban in New Brunswick … not in place yet

City council in Moncton, N.B., voted unanimously Monday night to call on the province to ban all uranium exploration and mining in New Brunswick.

The Liberal Government of New Brunswick defeated a ban on uranium mining in New Brunswick. Environmental groups continue to struggle for a ban.

The state of Virginia / US has a current moratorium on uranium mining in place since 1981. It can be lifted only if the Virginia General Assembly enacts enabling legislation to allow for development of regulations to mine uranium.

In December 2006, an Indigenous World Uranium Summit was held in Window Rock, Dineh (Navajo) Reservation, Arizona, USA, one of the areas severely contaminated by uranium mining from the past.

Participants issued a Declaration and ‘demand a worldwide ban on uranium mining, processing, enrichment, fuel use, and weapons testing and deployment, and nuclear waste dumping on Native Lands.’

The Navajo Nation has outlawed uranium mining and processing on its reservation, which sprawls across parts of Arizona, New Mexico and Utah and contains one of the world’s largest deposits of uranium ore.

Moratoria and Bans on Uranium Exploration and Mining

Moratoria and Bans on Uranium Exploration and Mining – in effect

On April 24, 2008, British Columbia imposed a ban on uranium exploration.

On February 27, 1980, the B.C. Minister of Mines had announced a seven-year moratorium on the recording of mineral claims for the purpose of uranium exploration and the development of uranium deposits on existing claims. The moratorium expired in 1987.

On March 28, 2013, Québec imposed a moratorium on uranium development in the province, until an impact study is completed

Nova Scotia has had a moratorium on uranium exploration and mining since 1982. If a company finds uranium in concentrations greater than 100 parts per million, it must report those results and stop digging.

Interior Secretary Ken Salazar formally signed a 20-year moratorium on new uranium and other hard rock mining claims on a million acres of federal lands around the Grand Canyon on January 9, 2012.

The Hualapai Tribal Council has voted to ban uranium mining on its Tribal lands which are located near the Grand Canyon in Arizona.

Uranium mining has been barred in Virginia by a 25-year-old moratorium.

Greenland doesn’t allow any uranium mining or prospecting to take place on the island. On Nov. 27, 2008, however, the Greenland parliament agreed to support the extraction of uranium as a by-product from mines where other minerals are the primary target (view details).

South Australia has proclaimed a mining ban for the Arkaroola region of the Flinders Ranges.

The Uranium Mining and Nuclear Facilities (Prohibitions) Act 1986 prohibits mining for uranium. A ban for uranium exploration was repealed on March 28, 2012.

Under a 1996 minerals programme, prospecting, exploration and mining of uranium are no longer permitted.

Moratoria and Bans on Uranium Exploration and Mining – repealed

On March 8, 2012, Labrador’s Inuit government enacted legislation to lift the moratorium on uranium mining on Labrador Inuit Lands that had been imposed on April 8, 2008.

The Uranium Mining and Nuclear Facilities (Prohibitions) Act 1986 prohibits prospecting or mining for uranium.
However, on March 28, 2012, the New South Wales parliament repealed the ban on uranium exploration.